Covid Close To You

Bart_ said:
A customer of mine helps out another elderly friend, whose 50 and a bit year old son got covid in a bad way.

I was informed about "intubation". One tube for oxygen, one tube for feeding, one tube for draining fluids from the lungs. Three. And, zombie sedation because when he came to he ripped the tubes out, a few times. Hope he makes it.

I just got 1st Pfizer. Sigh of relief.
Click to expand...

yikes! hear yall up there are having issues with rolling out the vaccine stockpile.
B

Our issue is not having a stockpile to roll out. More supply is starting to ramp up recently.

Posting this, not as evidence of over reaction, but more to put you at ease. From this morning's NY Times:


‘A huge exaggeration’​
​
When the Centers for Disease Control and Prevention released new guidelines last month for mask wearing, it announced that “less than 10 percent” of Covid-19 transmission was occurring outdoors. Media organizations repeated the statistic, and it quickly became a standard description of the frequency of outdoor transmission.​
​
But the number is almost certainly misleading.​
​
It appears to be based partly on a misclassification of some Covid transmission that actually took place in enclosed spaces (as I explain below). An even bigger issue is the extreme caution of C.D.C. officials, who picked a benchmark — 10 percent — so high that nobody could reasonably dispute it.​
​
That benchmark “seems to be a huge exaggeration,” as Dr. Muge Cevik, a virologist at the University of St. Andrews, said. In truth, the share of transmission that has occurred outdoors seems to be below 1 percent and may be below 0.1 percent, multiple epidemiologists told me. The rare outdoor transmission that has happened almost all seems to have involved crowded places or close conversation.​
​
Saying that less than 10 percent of Covid transmission occurs outdoors is akin to saying that sharks attack fewer than 20,000 swimmers a year. (The actual worldwide number is around 150.) It’s both true and deceiving.​
​
This isn’t just a gotcha math issue. It is an example of how the C.D.C. is struggling to communicate effectively, and leaving many people confused about what’s truly risky. C.D.C. officials have placed such a high priority on caution that many Americans are bewildered by the agency’s long list of recommendations. Zeynep Tufekci of the University of North Carolina, writing in The Atlantic, called those recommendations “simultaneously too timid and too complicated.”​
​
They continue to treat outdoor transmission as a major risk. The C.D.C. says that unvaccinated people should wear masks in most outdoor settings and vaccinated people should wear them at “large public venues”; summer camps should require children to wear masks virtually “at all times.”​
​
These recommendations would be more grounded in science if anywhere close to 10 percent of Covid transmission were occurring outdoors. But it is not. There is not a single documented Covid infection anywhere in the world from casual outdoor interactions, such as walking past someone on a street or eating at a nearby table.​
The article goes on to explain how some data from Singapore construction sites was too broadly classified and misinterpreted to come up with the 10% figure. One study was too limited in what they classified as indoors, and so many gatherings of people were dumped into the outdoor bucket when they weren't clearly an exclusive outdoor activity, such as work, education, shopping, travel, health care, social events, catering, etc.

A final conclusion from the article:


All the while, the scientific evidence points to a conclusion that is much simpler than the C.D.C.’s message: Masks make a huge difference indoors and rarely matter outdoors.​

If you are in close contact with other people outdoors, masks can be benficial in my opinion. If you are outside and nobody is near or close to you, then you probably don't need a mask.

I wear a mask when I do estimates because I don't know the behavior of the clients I'm going to see so I want to be prepared in case they are not always mindful about social distancing, etc. When I am on the job site, I wear a neck gaiter to block out dust and also use as a face covering when I may be near my worker, but if we aren't near each other, we pull our face coverings down (unless I'm using mine for dust).

That's just my opinion and what I do.

An article about how vax requirements are being dealt with in Minnesota. My guess is that this is how things are in other states too. 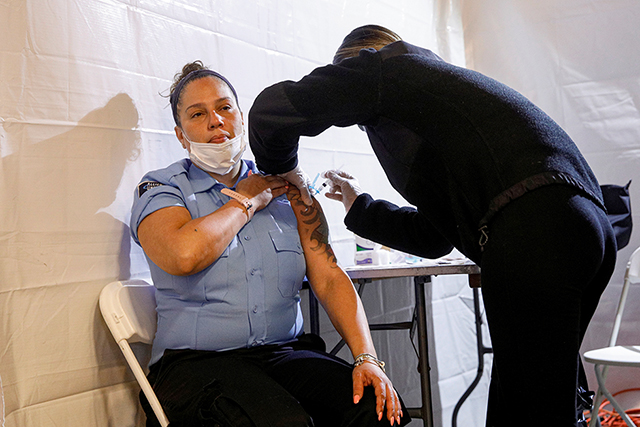 Can Minnesota employers require workers to get a COVID-19 vaccine? Will they? | MinnPost

The question has gained urgency as businesses begin to seriously contemplate bringing remote workers back to offices.

I'm always amazed by how many people don't realize this - until they get fired, lol:


"...it helps to know that the U.S. is an at-will employment jurisdiction...That means that in most cases, employees work at the discretion of their employers and can be fired at any time and for most any reason.​
​
“So if you’re a Packers fan, they can fire you,” he said.​
My employer requires a yellow fever vaccination as a condition of employment since they send us to yellow fever endemic locations. Don't like it? Hit the road. They also require a credit check, security check, criminal background check, fingerprints, work and education verification, drug tests, and a medical exam.
B

If someone coughs upwind of you, you get a royal spray down. Just watch carefully, like poker, and if you spot a tell, dodge aside real quick about 5 feet ought to do it, before the cough spray gets you. Don't let your guard down. Split second reaction. Or stay upwind, it might look funny as you maneuver around with the shifting breeze, but hey, that's ok.

Or if they cough and walk away leaving an aerosol cloud, use your radar vision to avoid it. Just like how you avoid fart clouds that a__holes leave behind at the grocery aisle as they anonymously walk away.

I'm being facetious. Practical simple solution is just wear a mask with not-known people. Or social distance. Same old stuff as from day one.

I almost squeezed some fun out of the topic. Who'd'a thunk.


To me, indoor regular breathing is the known spreader. The aerosolizing power of a sneeze or cough and quantity sent out is hugely higher than just breathing, and so negates the aerosol dilution effect of being outdoors.


On a sadder note a 66 year old inlaws relative passed away after 3 1/2 weeks icu. One kid caught it, gave it to spouse, brought it home to parents, both parents caught it and then the one died (wife).
B

Our case numbers have now declined to the same low levels as last summer when we thought we had got a handle on it.

Time will tell. Hope we win out this time.
E

A universal cure for the coronavirus has not yet been invented. But our own body is so unique that it can defeat the disease on its own. For this purpose, it is given a kind of shield in the form of an immune system. This shield must be reliable and robust. To reduce the probability of COVID-19 infection, it is necessary to reduce the concentration of pathogens in the air. It is this that largely determines the likelihood of disease. For your safety, I would recommend that you have instant tests for coronavirus . So that if you have the slightest suspicion, you can do the test because the earlier you start treatment, the greater the likelihood of success.
Last edited by a moderator: Jun 8, 2021
C

Eygon said:
A universal cure for the coronavirus has not yet been invented.
Click to expand...

If early treatment then HCQ or Ivermectin pretty much covers 85-95% of even ICU patients, but the treatment is being actively suppressed.

As far as current promoted options these may be of interest...

Chaplain242 said:
If early treatment then HCQ or Ivermectin pretty much covers 85-95% of even ICU patients, but the treatment is being actively suppressed.

As far as current promoted options these may be of interest...

Those articles are interesting. I won’t express my opinions of them here, as I prefer to keep to tree topics on this forum. I will however mention my feeling that Eygon may be a spammer, if so in a few days that post will be edited to become much longer and will then contain a spammy backlink to an unrelated site. I hope I’m wrong, but I’m guessing I am not.
B

Just saw a news blurb that 1 dose of Pfizer only gets you about 30% protected against the new delta variant, which is on its way to being the predominant strain.