I think our use of a 10:1 safety factor on components rated 23kN and over probably covers a hell of a lot of the wear and tear, and abuse, inflicted on the equipment. I mean, from what I can tell, equipment failure isn't the big killer. I can honestly say that in the 1970s I climbed on crap that was nowhere near as safe as what's available now. Towers, poles, trees... everybody was using stuff that wasn't nearly as nice as what we take for granted these days. I painted a lighthouse sitting in a bosun seat with a block and tackle rig that was decades old... with 5/8" manilla rope that smelled like old sweatsocks and mold. I still can't believe we survived that job.

I guess all you can do is keep an eye on the ropes and when they look ratty enough to give you the creeps, use them to tie brush down in a trailer and buy more rope. I think Richard does us all a favor when he breaks old, retired stuff... we get some insight on how much strength is still left in it. I'm usually surprised when it turns out that it probably could have gone awhile longer, safely. 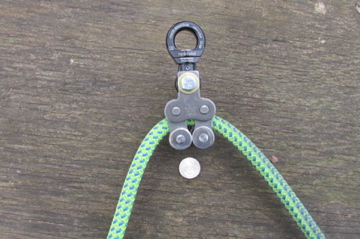 Brocky said:
I didn’t think to mention that the bollard didn’t rotate. My questions were a sneaky way of pointing out the illogical use of rings on rope bridges, most seem to be only about a 1:1 ratio.
Click to expand...

I wouldn’t worry much. On a reputable harness the testing has been done. One of the best reasons to use what the manufacturer states.

There is a lot that goes into materials selection for life support. The 10mm bridge on a treemotion for instance will flatten to 12mm under load. 12mm is the standard diameter of the pins that the break test machine uses to meet the CE standards for hardware... you can‘t always see the logic, but it is there in many cases.

As an aside, when you have 2+rings the failure point may shift away from the rigging point. (I say “may” as the testing was far from scientific, but there was consistency). While not an increase in bend radius, as has been discussed, I think the strenght gains at the rigging point with 2+ rings may be due to the shifting of the ring position. One or two of the rings will move up or down and therefore change the angle of entry and/ or exit of the rigging line slightly, before the change of direction.

Having said that, I think that if you are rigging loads heavy enough you are worried about rope failure at the rigging point due to bend radius, you need to adjust your plan!

When it comes to rigging point below the load set ups, a block is always a better, stronger choice when it comes to strength, reliability and durability.

Brocky said:
I didn’t think to mention that the bollard didn’t rotate. My questions were a sneaky way of pointing out the illogical use of rings on rope bridges, most seem to be only about a 1:1 ratio.
Click to expand...

The ring on the bridge has an amazing bend radius because the bridge is always held apart.

The logical reason for the ring is friction and a singular attachment point. This could be done with a biner but I find when I’m making rigging systems etc people will take pieces off that can come off then they’re not there when you need them so I’m a fan of fixed rings no one can move. A pulley on the bridge may be smoother but imo some friction is a good thing let’s you move a bit without completely shifting your attachment point.

So as for a ring on a bridge I think the bend radius is not really a factor. Whether it’s a 1/2” ring or a 4” rigging block the fixed ends will still keep it from bending around.

When you watch oldfart’s videos he makes mention of bend radius as being nicer and more comparable to a pulley when he was stacking rings.

I think that’s a good example of the visual people have. They get told 4:1 is an optimal bend radius by Sampson, etc. So for example they have a medium porti with a 2” barrel they look at the size of the barrel not the entry and exit angles.
They get told micro pulley are great the see a 1” pulley so therefore 2 1/2” rings is the same size so it’s the same.

I find people will learn and bend radius is great but flexible I made some light rigging fs they’re cheap, quick, easy and good enough for lots of things but the angle rings approach each other due to the diameter of the tree, etc affects the bend, the apex, the span, etc but all with the same tool.

The hardware gives 1” and the weak link is the round ring at 1100 lbs swl. I have the heavy sewing done by a harness shop they sell that stitching to hold a Clydesdale or a bull. So is it the perfect tool? Just like every other tool the answer is maybe sometimes.

You’re right, a bridge rope won’t see a 180 degree bend, which affects the rope the most, but does see a deflection of more than 10 degrees.

But saw this on google images, perhaps multiply rings are better than a single, but not as good as a larger single ring as Jeff stated before.

Most of my comments have been directed to the use of the term bend radius as a descriptor of the object the rope is exposed to. By definition, it's only a radius if we're describing a circle or part of a circle. Any other shape, and we should be talking about effective bend radius which would also cover the effect that rope angle has on the stresses and weakening of the rope as it passes over the object, whether it is a circular shape, or not. For example, if the shape of a bollard is a hexagon, it will more closely resemble a round bollard of similar size. It would not be as good as the round bollard, but would be considerably better than a triangular shape of similar size. As rope angles flatten out, the weakening effect a round bollard has on the rope is reduced... the bend radius hasn't changed, but the effective bend radius has, as less of the rope is subjected to the effect.

This gets back to the multiple rings... the bend radius hasn't changed, but the effective bend radius has, because the shape presented to the rope is larger and the bend angles of the rope have changed to something less damaging to the rope. This might very well be better for the rope than the single ring... but it still isn't nearly as good as doubling or tripling the actual bend radius.

This is the point I have tried to make. Not that multiple rings are bad, or that they're not better than a single ring... only that actual bend radius hasn't been increased... the effective bend radius has, and this is a compromise to actually increasing the bend radius (which may not be practical) to a much larger size.

One would think Sherrilltree would proof-read their statements! Effective bend radius is a much better descriptor.

JeffGu said:
If you're after more friction, stacking the rings will provide that (more than two). If you're after increased rope life, increase the stock material diameter of the rings, or switch to pulleys.
Click to expand...

friction is merely a factor of the coefficient of friction and normal force. In the scenario of lowering wood/rigging in general, you would get more friction within the system by applying more friction at your lowering device- be it additional wraps on your device, or just by holding more firm on the line as the piece runs/you are making it stop.

I'll have to explain that to new companies I contract climb for when they inquire "so whats each of those rings good for- one wrap? two less?" When in reality the rings are a friction multiplier to what you are imparting on the lines.
You must log in or register to reply here.
Share:
Facebook Twitter Reddit Pinterest Tumblr WhatsApp Email Link