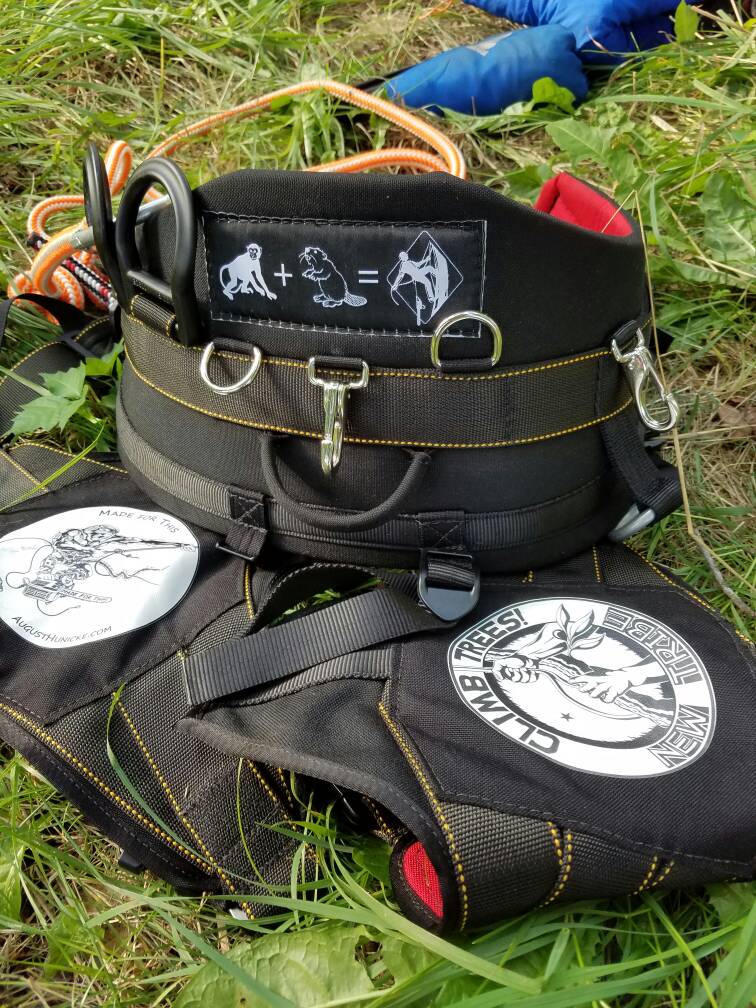 Anyone else tried this? I think it was designed by August Hunicke.
I got to try this harness out for half a day. Not a working day, so I didn't attach anything to it.
I suppose this is a bit of a review.
It's a New Tribe, and I think it's designed to be a light production harness.
I hated it at first, but once I adjusted it, so I could hang vertically, it was much better.
You can install a caritool or a Shembiner or something like that, looks like. I think I'd want to fix other loops here and there for carrying stuff.
It doesn't have lower D's but the rope bridge is attached to little cat paw plates, so you could attach there.
The large triangular leg pads were strange to me, but pretty comfortable after getting used to the way it feels.
Anyone else tried one? I'd like to try it in a work situation, but probably not going to happen. I probably missed some features and maybe even drawbacks.
I don't know if it's significantly different from the Onyx, because I've never seen one.


Sent from my SAMSUNG-SM-G930A using Tapatalk

Looks pretty sweet thanks for the sneak peak. Where did you get said peak?

Where did you get your hands on that?
I haven't even seen it for sale yet and didn't know they were letting folks test it. I love the Onyx, and have been waiting for this release to hear feedback.

What's up with the 2 D's side by sideon the left hip?

It is an August Hunicke designed saddle and doubt he'd design anything for "light production". I've heard it is also supposed to come with a transporter by rock exotica.

Not sure if you got your hands on the end product.


Sent from my iPhone using Tapatalk

It looks like a comfy saddle (and I love New Tribe), but I've never been a fan of August Hunicke's monkey beaver pictograms or whatever they are. So, if this is an example of how the saddle is going to be released to market you can count me out.

I wondered about those D's on one side too. I also find the huge decals on the leg pads a bit off putting. Too big.
I really like how the waist belt fit. There seemed like a bit of a taper to it that would keep it from sliding down when saws and crap were hung all over it. I'd love to test it in a removal environment.
It was available at the Women's Tree Climbing Workshop last weekend. I got to use it for half a day, ironically because my Sequoia didn't pass gear check!(although I could have tried it out even if mine was fine). I guess I need a new harness.

Sent from my SAMSUNG-SM-G930A using Tapatalk

Casey can probably fill us in.

Sent from my SAMSUNG-SM-G930A using Tapatalk

Info is up on the NT website, preorders are being accepted.

It does look nice, not sure about those double d's, seems like unnecessary weight but maybe I'm missing the point.
T

@Bob Bob; Am I the only guy who can think of a good use for a nice set of double d's?

Welcome to the TreeBuzz forum, by the way. I think you're going to like it here.

TimBr said:
@Bob Bob; Am I the only guy who can think of a good use for a nice set of double d's?

Welcome to the TreeBuzz forum, by the way. I think you're going to like it here.

Leave this comment in your head next time please Tim.

On a serious note. Why two side by side? What makes them more useful than a shembiner or caritool? My first thought is to cut them off - lol.


Sent from my iPhone using Tapatalk

The two sets of Ds are for chainsaw options, from what I understand, part of August's input in design. I didn't get to climb in this over the weekend, but it was shared, so hopefully we can get more feedback soon.

New Tribe is debuting it now at ArborFest West in Sacramento.
I did get to try it on on the ground, and one feature that intrigues me are the thigh webbing straps meant to hold the leg straps in place for your best fit. Kinda like a pistol holster or knife sheath leg strap would.
Last edited: Sep 17, 2016

kind of reminds me of that Simpsons episode where Homer gets to design a car.

He's been hanging out with limbloppa and jeffgu too much.

Newly minted days before the workshop. Way to come through!