I'm pretty new to climbing and this forum (although I've been on Arboristsite for a long time) but I recently found an Ebay seller that has good deals on rope and thought some of you may be interested. The seller is "castobargains" and they're based in Georgia. They sell odd lengths of all different kinds of rope including top of the line climbing and rigging rope. They rarely name the manufacturer but they do list the full specs and a quick glance in a catalog will tell you what is what based on color patterns. I just got a new 90' chunk of Tachyon for $56 shipped. Check 'em out if you want, their service has been great so far.

I've seen his listings and just bought some T-Rex from him.
Most of the ropes he sells are look to be Chinese imports.
I'd be careful what you buy from him.
Could you link the listing that you bought the Tachyon from?
N 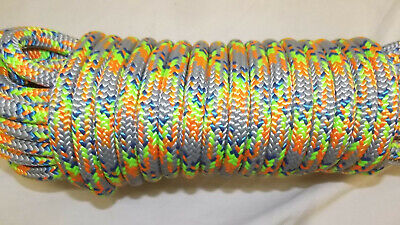 This is for a shorter piece of the same rope.

This is for a shorter piece of the same rope.
Click to expand...

Definitely looks the part though it's listed as 11.1mm instead of 11.5mm.
Going to have to have a closer look at his other ropes and shoot him an email.
If these are legit then you spotted a really nice deal.
N

That may be an issue of conversion tables. If you use the Google to convert 7/16" to metric it actually shows both 11.1mm and 11.5mm. I also got a 40' piece of what looks to be New England KMIII 1/2" in safety green/blue fleck for $29 shipped. It sells for close to $1.50/ft normally so again a decent deal. Got that for bridge material and a short Captain Hook line.

Just sent him an email.
Hope he responds and can say.
The T-Rex I bought at least was named in the listing.
Good detective work on you part and thanks for posting that info.
And welcome to the forums.
N

Thanks! Here's another listing for what looks to be Teufelberger Xstatic. I just bought a new 200' piece for $188 from a friend so I know what it costs and looks like. This is too short for most uses, just posting as an example of what they have. 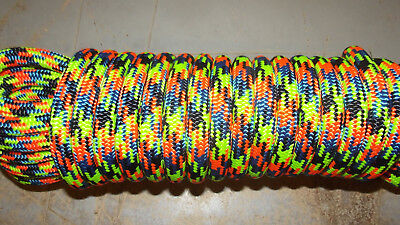 I've gotten a lot of rope from him. He buys the rope OEM's shorts by the ton, just like our favorite online retailers, only he gets them from a lot more sources. My experiences have been good, dealing with him. You can easily identify nearly all of the ropes, except some of the oddball ones out of Asia and Canada. Some are easier to identify by checking on sites geared to other at-height disciplines, and especially on sailing/boating sites.

Never once have I gotten a rope from him that was Chinese rope "disguised" as something else. The clones are very easy to identify and always look different enough to spot immediately. Sometimes the ropes have tags identifying them, if the OEM tagged them. If you can use shorter hanks, you can get some real bargains.

Remember that all of the Rope companies will make custom versions of their ropes for their bulk customers. Sometimes you'll get a rope that you're sure is something you have, but different color scheme. That's actually not unusual, at all. They might have made it for say, a sailing supply house who ended up going bankrupt, or it didn't sell well, and the rope OEM ended up with a buttload of it that the customer couldn't buy. It ends up in that truckload of shorts and stuff these ebay/amazon guys buy up. It's not a big, scary scam. It's just some guys capitalizing on a good deal and working out ways to sell it that the rope OEMs don't have time to mess with.

Try this sometime... work a tree, and when you are at a point where you think you've used the most rope you need for the job, have someone wrap a piece of tape around the tail end of the rope where it meets the ground. Measure it later. It just might be that it's say, 88 feet. Now, if that was a typical tree size for 50% of your jobs, you now know that you don't really need 150' of rope. So, an 88' rope in the truck will work half the time and it didn't cost you nearly as much, so you can own more ropes that you can actually use, without spending as much money. If you can splice that rope, you just saved a bunch more money, over the long term.

Just my two-fiddy worth. I've made a lot of lanyards and stuff for friends out of those bargains on Amazon... tree swings, small MA systems, etc... it's pretty damn useful stuff. Learning to splice on 200' hanks of top-dollar rope doesn't make sense.
T

I buy some from a guy on the east coast that sells them at flea markets and what not. Pretty sure he told me that he is not allowed to list most of them online by name/brand. But if I message him and ask is this blah blah rope or he will tell me if it is a different one
N

This is what I suspected. Now we know!

If you buy discount rope just be extra sure to inspect it. Run through hands several times, and close visual inspection before service.

I climb on several yale ropes btw 60-110'. Love my shorts, especially if they're cheaper!

I have nothing against short ropes.
The first rope I ever bought was 80' of Blue Streak.
I still have it to this day in storage and it served me well when starting out.
There is definitely legitimate uses for short hanks especially if you're into splicing.

I'm always looking for good deals on rope and would glance over Castobargin's ropes after looking his items over years ago.
Was really surprised after checking today after Njdelaney's post.

Can any of the kernmantles that he sells be spliced?

OP, I have bought from this seller and have no complaints. Tropical Ivy, Calamine, and Hivy. Short lengths but that is what I was looking for, I think the Tropical was 90'.

If you ask who the manufacturer is they will tell you. The reason they give for not listing it is something to do with the sellers agreement when they purchase the rope for resale. Or so I remember.
T