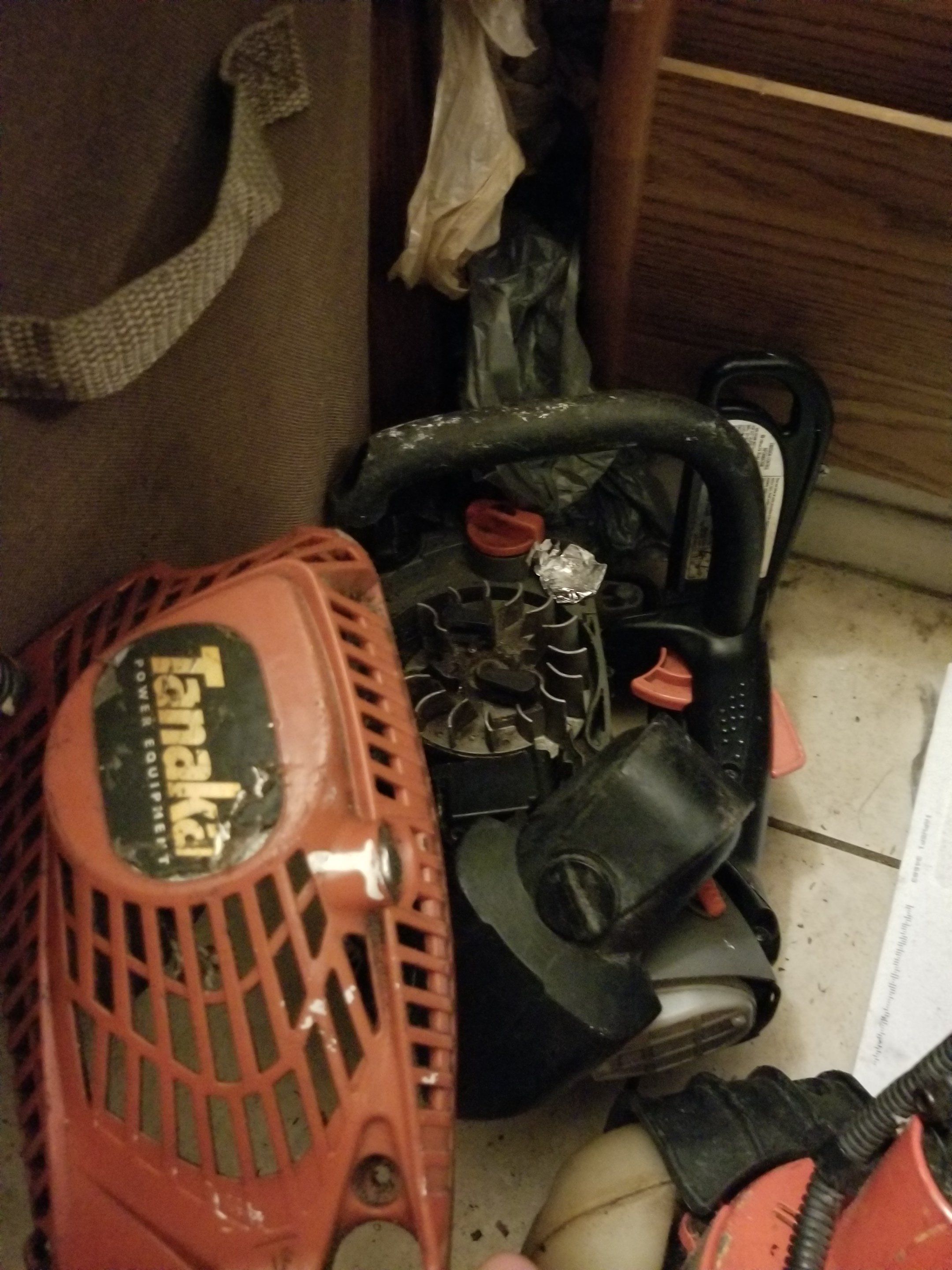 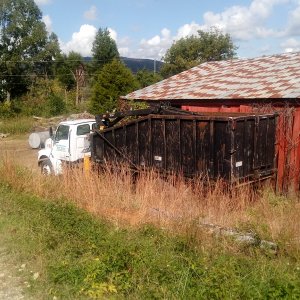 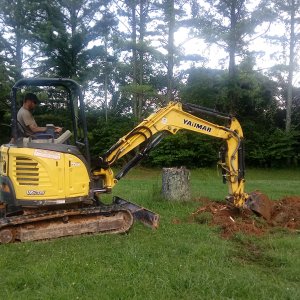 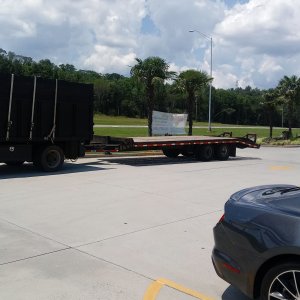 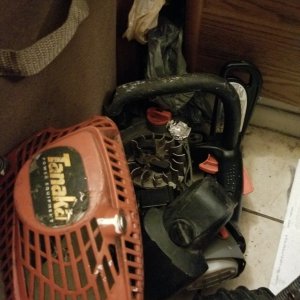 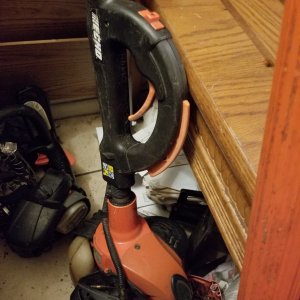 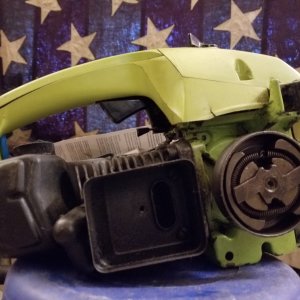 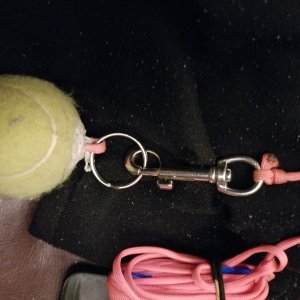 Already figured out the problem (flywheel fin broke-off and ensuing chaos dislodged the ignition-coil or whatever that box on the end of the spark-plug-wiring is), going to see if I can stitch this guy back up it doesn't seem beyond repair, this'll be a real xmas present to myself :D
Click to expand...
I think I'm going to make a thread as I'm just so stoked w/ this guy but am going to take him apart 1 last time 1st as my ignition-module-fix isn't as secure as I'd like so will be JB-welding it to the block and then 'packing' a fat rubber buffer/washer between the top-face of the module & the plastic body-shell of the saw to really pin it in-place, at any rate it worked and once I swapped-out the older 16" and put new Oregon setup on instead it was going through Oak like butter I was just amazed but had to hold-back as I knew my ignition-module-mount wasn't very secure!
I didn't (yet) begin 'real' mods like port-grinding, timing etc etc but did do a whole lot of mini-mods like air-flow (bigger&cleaner), exhaust (in humid FL you can really open them up!), and usability stuff like fixing/replacing annular buffers/anti-vibe-grommets throughout handle assembly, reducing&slotting the hand-guard panel for bar-visibility (like on a husq 540), reduced the length of the absurdly-long dogs to near-nothing (w/ a 16" bar I figured I'd leave them on, on my 12"/25cc unit I'd never put the dogs on there's no point & they reduce effecttive cutting-length of the unit), put a 1/2" compressed rubber-bushing inside an Echo pull-start handle for more-cushioned pulls (and to give it the smallestt pull-start handle I had on-hand, unit had no handle or bar/chain when I got it) Problems it had when-received (in-lieu of a $25 debt from a guy I'd worked for)
- flywheel fins had snapped-off and smashed-up the ignition module & knocked it off the block, its retention screws sheered-off in their female slots on the engine block (lotta vice/clamp work to fix the box's shape and JB-weld&pressure from rubber-washer to secure it now)
- was ~4" of cord on the recoil assembly, used 3/16" low-stretch polyester rope & Echo pull-handle to rebuild,
- shaft//shaft-seal interface had a fist-full of hair in it as-if something were butchered w/ tthe thing (literally looked it for blood am not kidding!), got out as much as I could and it moves well-enough it's a touch rough when off/cold and you're turning by-hand, sadly I've yet to reach point of comfort to dissemble the crankshaft area's assemblies!
- exhaust was a mess, someone had...tried *something*, uncertain WTF they were aiming for as spark-arrester was still there but I removed arrester, cleaned-up the exhaust-outlet on the block and then cleanly re-insttalled the muffler, omitting a couple of the muffler's outer-plates (may drill or grind some more 'flow' into it today or tomorrow rather as I want to get baselines on 'OEM-ish' before doing anything beyond the air-intake and I can easily reverse that for my baselines, have a tachometer but honestly I think I get better baselines by timing a 3-cuts-through-log run, using a ~8" wide log and just doing 2-4 attempts at a best-time for 3 cuts like in the logger-competition 'sports'

Well pics are worth a thousand words and the gallery/Media here doesn't seem to let me add / make an album from this already-submitted pic but it's been 3wks and this Tanaka(Hitachi Group) tcs33edtp is now a great saw, if it weren't so heavy I'd call it my favorite (my scheppach/jon-cutter/etc 25cc/12"/7lbs is still my fave!!) hell maybe in-time I'll get used to a larger climbing saw and it'll become my favorite, I LOVE that I can get backup/secondary units of either of these saws all day for $100 or $220, respectively for the 25cc or this 33cc tanaka, am expecting I'll get a 2nd 25cc soon and *may* get a 2nd tanaka after which point I'll go **lithium** and use the gas units when-needed but default to lithium for most stuff (it's amazing what the 40V units can do and now w/ 60V hitting shelves I'd bet we've hit the upper-wall for power, IE there'd be little need/value to go 80V for a handheld saw, if I had the $ I'd already be happy to buy 40V Husq products but expect in 12-24month we'll see a lot of action in this arena as HP//weight ratios will become whatever the manufacturer chooses for instance it'd be simple enough to make overly-powerful / dangerous saws w/ 60-80V on tap so it will become a game of comfort and weight//HP, will be nice to have a 5lbs top-handle with the power of a 200t and that is most-certainly coming very soon -- these no-name/generic saws are my perfect 'until then' gear